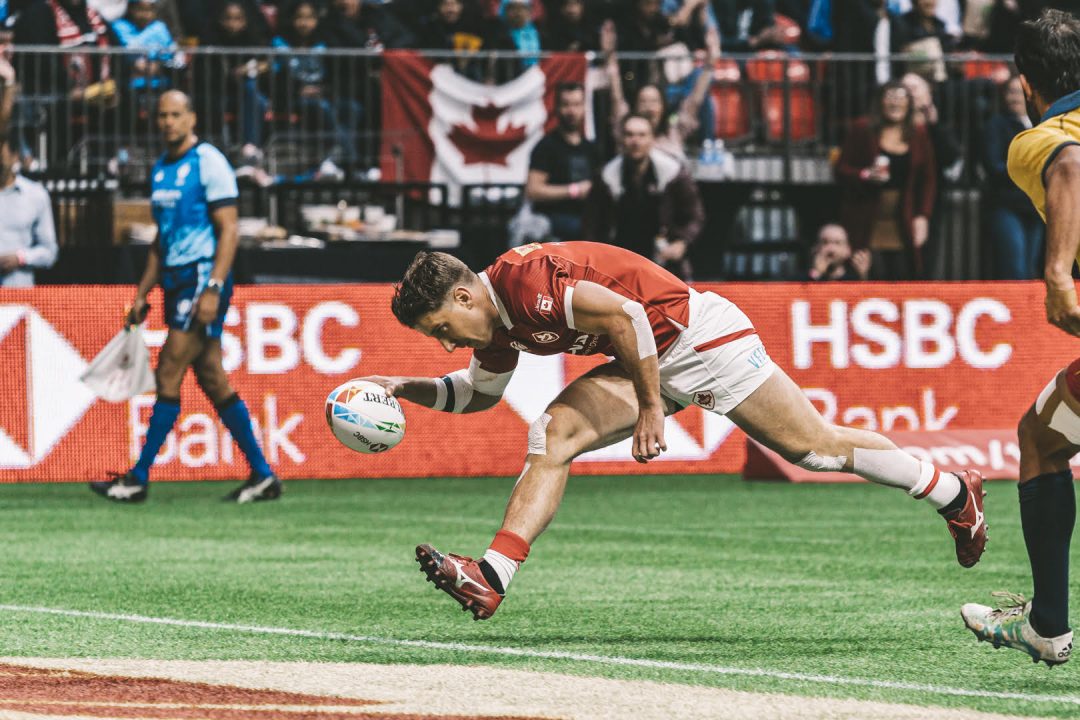 The Olympics are off to an entertaining start, with more excitement set to grace our screens every night until Sunday, August 8. Held in Tokyo, Japan, the delayed 2020 Olympics are hosting a special guest from the Engel & Völkers family, Lucas Hammond, who is competing for the Canadian Rugby 7s Team. In celebration of both Hammond’s success and the unifying power of international sport, Engel & Völkers is featuring the Olympic host city, Tokyo, Japan, and our very own Lucas Hammond, as well as showcasing properties with Olympic-level athletic facilities.

Japan has a rich Olympic history — hosting the 1964 summer games in Tokyo, as well as the 1972 and 1998 winter games in Sapporo and Nagano, respectively. Tokyo, however, came from humbler beginnings than its current grandeur would suggest. The city was originally a small fishing village named Edo. In 1603, the feudal military government of Japan, the Tokugawa Shogunate, named the village its capital. The Tokugawa Shogunate held power for nearly 260 years until the Meiji Restoration in 1868 when imperial rule was restored. In victory, the Emperor moved to Edo, renaming the capital city to Tokyo. Tokyo now has a population of 13 million people in its center and over 38 million including its metropolitan area, making it the largest city in the world.

Tokyo is an inspiring city that perfectly blends historical charm with modern luxuries. The city is known for both its ancient shrines and temples and its propensity for new trends in fashion, music, art, technology, and animation. A cultural hub for creators not just in Japan but around the world, Tokyo is home to numerous traditional arts such as ikebana (flower arranging), origami (making objects by folding paper), and ukiyo-e (woodblock printing); kabuki (complex dramas performed in elaborate costumes), bunraku (puppet theater), and kamishibai (storytelling with animation, sound, and music).

This summer, Engel & Völkers advisor Lucas Hammond is taking Tokyo’s culture and beauty in first hand during the delayed 2020 Olympics.

If being a successful real estate advisor isn’t enough, Lucas Hammond of Engel & Volkers Victoria is also a world-class athlete; the 27-year-old will be competing with Canada’s Rugby 7s Team during the delayed 2020 Olympics.

Originally born in South Africa, Hammond moved to Toronto as a young teen to train and compete full time with the youth Canadian Rugby 7’s team. He debuted in Dubai when he represented Canada at the U17 level, and over the past 9 years, he has traveled the world and competed in the HSBC Rugby 7’s World Series. Throughout his athletic career, he has competed in two Rugby 7’s World Cups and two commonwealth games, in addition to winning a gold medal at the 2015 Pan American Games.

Through world travel, Hammond has developed an appreciation for the cultures, perspectives, and diverse backgrounds around the world. This appreciation, along with his team-focused personality, allows Hammond to easily collaborate with people from all walks of life. When it comes to advising, Hammond has the expertise, integrity, and work ethic to making the buying and selling process as simple as possible for his clients.

Olympians like Lucas Hammond may play on their teams’ freshly cut fields and expertly polished court floors, but discerning buyers can purchase their own properties with private facilities to enjoy for personal or professional sports play. Engel & Völkers is proud to represent a number of properties with Olympic-quality athletic facilities. From homes with private basketball courts to bocce ball, here are just a few properties fit for Olympians.

Set in the heart of Napa Valley’s wine country, this pristine five-acre estate is equipped for athletes across three sports: bocce, basketball, and swimming. The grounds of the over 6,000 square foot home include a bocce ball court, half basketball court, and large swimming pool. Surrounding the facilities, manicured lawns and healthy Cabernet Sauvignon vineyards embody the sophistication of the St. Helena community.

Inside, the home’s two levels are perfect for hosting large functions and intimate gatherings. A bright, spacious chef’s kitchen is perfect to prepare meals in as guests relax poolside or under the loggia. French doors on the main floor lead to exterior gardens, and upstairs balconies overlook the panoramic views. Additional amenities include a library, guest quarters, a 1,000 square foot pavilion, an office, a wine cellar.

The Avenel Golf Course isn’t the only athletic facility accessible from this luxurious, 14,000 square foot home. While all residents of Avenel enjoy access to a private pool, walking and biking paths, ball fields, and basketball courts, this home’s private lighted tennis court makes it truly unique. Inside, the home features an elevator, owners retreat with private veranda, home theater, bar/billiards room, gourmet kitchen, and separate apartment, which could be used as an au-pair or in-law suite. Designer touches adorn every room of this secluded estate, working to evoke the grandeur of an English countryside estate.

Totally fit for royalty, this stunning, artistically designed home will be envied by many. Athletes can make use of the property’s multifunctional sports court, which can be equipped for full-court basketball or tennis. Inside, the castle boasts ten unique fireplaces, a wine tasting room, and a kitchen with space for multiple chefs. An elevator carries guests upstairs to a completely separate apartment/completely separate guest house with its own entry from the street.

This elite and prestigious Sporthorse facility has been professionally designed and maintained for top equine athletes. Offering a luxurious equestrian experience, the property includes 10 acres of land, a 19-stall show barn, a 3-stall USDA certified quarantine barn, and a detached three-bedroom, two-bathroom staff house. It also offers an Olympic-level 205 x 85 foot covered riding arena with Martin Collins CLOPF footing and a Risohorse sub-irrigation system, a 100 x 220-foot outdoor arena with GGT footing, an all-weather GGT round pen, 11 paddocks, and 3 RV Hookups. A newly constructed tent pad with full electricity, water, and a fly spray system to house eight to ten 12×12 portable stalls round out this property. 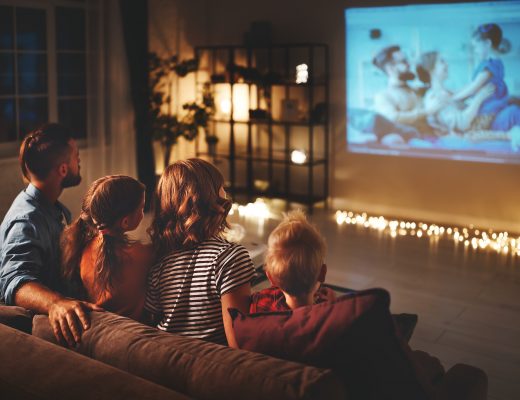 Staying In: An Entertainment Guide 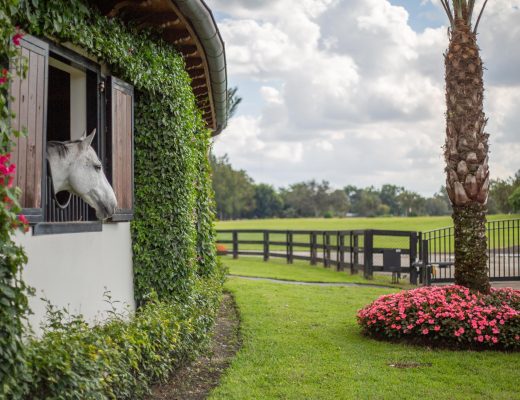 Saddle Up | 5 Homes Fit for the Equestrian 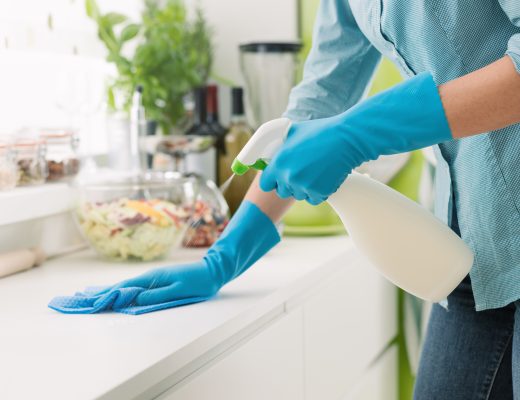 Keeping Your Home Clean and Sanitized